SALT LAKE CITY, Utah, Dec. 22, 2020 (Gephardt Daily) — The ACLU of Utah no longer employs a man arrested Dec. 18 for allegedly firing multiple times on a car that had his three children and estranged partner inside.

Aaron Kinikini, 45, was arrested last Friday. The statement issued Tuesday by the ACLU (American Civil Liberties Union) was short and to the point:

“Aaron Kinikini is no longer employed by the ACLU of Utah.”

An ACLU statement issued the day before the alleged gunfire had welcomed Kinikini to the fold:

“The ACLU of Utah is pleased to announce the hiring of Aaron Kinikini as the affiliate’s new staff attorney.”

Kinikini was arrested after the victim arrived at his residence to pick up the three children she and the suspect share.

“Victim and three kids were in the vehicle, the A/P (accused person) stood behind the vehicle preventing the victim from leaving,” the probable cause statement says.

The suspect told officers the vehicle drove at him at a high rate of speed.

“A/P produced a handgun and fired at and hit the driver side front and rear tires,” the statement said.

No one was injured.

Kinikini was transported to Salt Lake County Jail, where he is being held without bail. 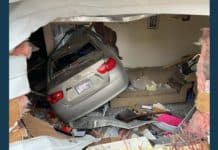