Reyes first took an “emergency” leave of absence immediately after the Nov. 3 vote, rushing to Nevada to “investigate” non-existent voter fraud there.

Reyes did not notify then-Gov. Herbert or Gov.-elect Spencer Cox of his unilateral decision, which drew criticism from both state leaders who questioned Reyes’ “motivation.”

The move also led to a petition drive signed by 27,000 Utahns calling for his resignation.

Reyes even went so far as to fly to Washington, D.C. on Dec. 10 and have a luncheon with Trump and 11 other GOP attorneys general as they plotted legal strategies for keeping the election-fixing allegations alive.

On Wednesday, shortly after a 35-year-old Trump supporter was shot and killed by a security officer inside the U.S. Capitol Building, Reyes took to Twitter to announce his indignation over the mob’s behavior.

“There is no place for violence in our political discourse, even over the most serious issues and disagreements,” Reyes tweeted at 3:26 p.m. from Salt Lake City. “We are a nation of laws. This is not how conservatives and Republicans behave. We are the party of law and order. We uphold the rule of law. This is unacceptable.”

“You are DIRECTLY responsible for this,” one tweet responder said. “Do the right thing and resign.”

“You’re complicit in fueling this behavior. Own it,” said another.

“You need to own this Sean. This is on you,” said another. “You helped throw the lighter fluid.”

● “But the election was stolen right? The president and his allies, such as you, are alleging something that leads to revolt and violence. Political discourse? Stop.”

● “You fed into his delusions of a stolen election and fanned these flames as well…I hope you have learned now what a desperate and dangerous man he is.”

● “You support the man who asked them all to fight for him. Just sit down.”

● “You’re a part of the blame here Sean. Stoking the fire of baseless claims of voter fraud that have been rejected by the courts. Shame on you.”

● “Do you really think we are dumb enough to forget you supported this movement just days ago?”

A few dozen Twitter followers offered support for Reyes, but they were greatly outnumbered by critics.

There is no place for violence in our political discourse, even over the most serious issues and disagreements. We are a nation of laws. This is not how Conservatives and Republicans behave. We are the party of law and order. We uphold the rule of law. This is unacceptable. 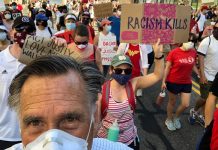 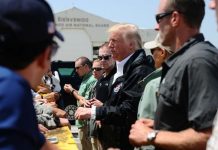 After signing emergency, Trump says Puerto Rico one of ‘most corrupt places on Earth’