The child, Leo Isador Hiibel-Cloutier, was last seen at about 8 a.m. at a Super One Foods grocery store in Rathdrum, which is in the northern part of the state. He is believed to be in danger, police say.

Leo is believed to be with his non-custodial mother, 35-year-old Mimi Charmayne Hiibel. They may be traveling with a 17-year-old male.

Leo has black hair and brown eyes. He is about 4 feet tall and weighs about 70 pounds. He was last known to be wearing a white T shirt, black corduroy pants, black sneakers and a camouflage hooded jacket.

Mimi Hiibel may be headed to Nevada or Oklahoma, police say. A vehicle she was previously thought to be traveling in has been located.

Mimi Hiibel is white with brown hair and green eyes. She stands 5 feet 4 inches and weighs 145 pounds. She has the letter “J” tattooed on the back of her left hand, near her thumb. 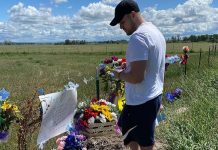