AMERICAN FORK, Utah, Jan. 11, 2022 (Gephardt Daily) — An American Fork man has been charged with impersonating a law enforcement officer after a hospital became suspicious of his uniform and summoned police.

“Staff reported a male (later identified as William Graham) was at the hospital claiming to be a police officer wearing a duty uniform, including a vest, badge, and Salt Lake
City Police shoulder patches,” says a probable cause statement filed by the responding officer.

“William told hospital staff he was an officer and performed officer duties, such as traffic stops,” the American Fork officer’s statement says. “When I contacted William at the hospital, he wore a hospital gown. I could see a belt commonly used by police and security personnel. The belt had multiple handcuffs, pepper spray, a baton, two handgun magazines loaded with ammunition, and a flashlight.”

The vest was of a variety typically worn by police officers, the statement says. It bore a silver badge, which said “Officer Sgt. Graham Utah State PSD W-368.”

The vest was labeled “Chris Graham Officer – MEDIC.” The back of the vest had a Velcro patch that said Emergency Response Team, the statement says.

The AFPD officer called the SLCPD, and was told the department had no officer or cadet named William Graham, the statement says.

Graham, 39, faces an initial charge of impersonating an officer, a class B misdemeanor. His bail was set at $1,000.

The officer noted Graham also was charged in 2012 for impersonating an officer. 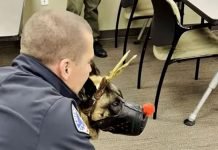