NORTH SALT LAKE, Utah, Aug. 4, 2021 (Gephardt Daily) — A Utah Highway Patrol trooper stopped on the shoulder of Interstate 215 in North Salt Lake on Wednesday afternoon had his patrol vehicle struck from behind by a passing driver.

“Another trooper is hit along side the freeway as a vehicle drifts off the roadway,” the Utah Highway Patrol tweeted.

“A vehicle traveled off the road way to the right and struck the patrol vehicle from behind. Neither of the driver’s sustained any injuries. The driver of the other vehicle stated he looked down for a second. Salt Lake City Police is handling the crash.”

This incident comes three days after a collision in West Valley City, which left a trooper injured and the driver of a pickup truck in critical condition. The pickup driver’s female passenger was treated at the scene.

“Please make sure to watch out for officers and observe the move-over law,” the Wednesday UHP statement says. 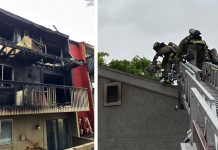