OGDEN, Utah, March 29, 2018 (Gephardt Daily) — Police are searching for a suspect after an armed robbery Thursday in Ogden.

The suspect then left the scene with an undisclosed amount of currency, in an older, dark-colored Mercedes. He was last seen on Interstate 15 heading towards Interstate 84.

The suspect is described as Caucasian, and between 40 and 50 years old. Police said he should be considered armed.

Anyone who has information about the incident is asked to call Ogden Police on 801-629-8188. 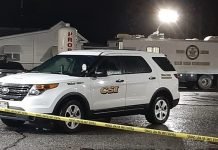 Officers on scene of reported shooting in Ogden