SALT LAKE CITY, Utah, Oct. 20, 2018 (Gephardt Daily) — A suspect in an aggravated robbery was taken into custody just before 1 a.m. Saturday after leading police on a brief, high-speed pursuit.

Salt Lake City Police Lt. Scott Smalley said dispatchers received a call at 12:37 a.m. from a man who said he had been robbed at gunpoint at the Alta Motel, 1899 S. State St., and his credit cards had been stolen.

The man described the suspect’s vehicle as a silver truck, and an “attempt to locate” call was relayed to all police officers in the area.

Smalley said a South Salt Lake officer spotted the vehicle and attempted to stop it, at which point the suspect fled and the officer initiated a pursuit.

The suspect, a man in his 40s, will be charged with fleeing, Smalley said. Other charges may be filed pending the outcome of the investigation.

Police: Ogden man sets house afire after parents tell him to move out 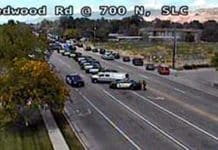