White had been placed on paid administrative leave in mid-November for his alleged mishandling of an incident involving three students who were found intoxicated on school grounds.

“Earlier today, the Salt Lake City School District informed Principal White that it was terminating him. This action stems from events that occurred during the morning of November 14, 2019, when Principal White encountered three female students who appeared to be sick on campus. Once Principal White determined that they were likely intoxicated, he addressed the matter without resorting to involving the police.

“The District placed Principal White on administrative leave the next day and warned him about speaking publicly about the matter while the District spent the next two months investigating. The District’s investigation never involved meeting with Principal White, however. And, at the same time that it demanded Principal White’s silence, the District has put out numerous releases and statements, spoken to the media, and gone so far as to send multiple alerts to West High School parents via text, email, and robocalls whenever it makes an announcement on the matter.

“The picture of the events of November 14, however, are much more complicated than the District has led the public to believe. They involve real crises and emergent concerns that the District, in its letter terminating Principal White, nonchalantly labeled ‘fairly routine and typical.’ When the public learns more of the day’s context, they will be surprised, if not disturbed, by the District’s view that it considers the events ‘fairly routine and typical’ within its schools.

“The investigation into Principal White and the news regarding the unexpected and seemingly forced resignations this week of Superintendent Lexi Cunningham and business administrator Janet Roberts show that the District is in disarray. In fact, internal reports from the Salt Lake City School Board suggest that board members have been targeting various principals for firing long before November 14, 2019. More time is needed to assess the role that personal politics played in the District’s action today.

“Principal White is weighing his options and carefully considering his next steps. He appreciates the outpouring of support he’s received over the past two months.”

“I can confirm that the district has concluded its investigation, and Mr. White was made aware of that conclusion earlier today. His current employment status continues to be out on administrative leave.”

In an interview with KUTV, White confirmed he’d been notified of the school district’s decision. He said he was informed Thursday he would be placed on unpaid administrative leave Friday. He said he’s been given 15 days to appeal the decision or resign.

As for the resignations of Superintendent Lexi Cunningham and business administrator Janet Roberts, the school district said both parties had contracts that expire this summer.

“In the contract it does say there isn’t guarantee of renewal, but if the board intends to not renew that contract, they have to provide written notice by Jan. 31, which is tomorrow,” Chatwin told the Deseret News.

The latest developments cap months of controversy, which began to unfold on the West High campus in mid-November.

White was accused of mishandling an incident involving the discovery of three female students who were drinking alcohol on a school park bench.

Rather than contact authorities, in accordance with district policy, White drove the three related girls to a relative’s home, followed by an assistant principal who gave him a ride back to the school.

White broke his silence on the incident Thursday night, telling local media outlets that he was perplexed by the job action. He said Nov. 14 was an especially troubling day at West High, where he and the staff dealt with a number of threats, including a message from a suicidal teen who was threatening to harm himself on campus.

White said they also confronted trespassers on school property, one of whom had beaten a West High teacher during a fight earlier in the school year.

Upon word of White being placed on administrative leave, an estimated crowd of 500 students staged a walkout on the high school’s front lawn Nov. 19. Hundreds more signed an online petition demanding White be reinstated. 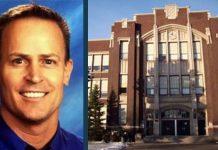