A ten-month-old baby in Eagle Mountain has died after being found unresponsive and not breathing in a bathtub at home. Police said circumstances are not suspicious and the investigation remains active.

A few minutes after noon, deputies with the Utah County Sheriff’s Office were dispatched to a report of a child who drowned at home in Eagle Mountain. When they arrived they found the child still unresponsive with a family member performing CPR. That effort continued while medical personnel with Unified Fire Authority and LifeFlight responded. After about 45 minutes of efforts to revive the child she was pronounced dead.

The baby’s name is Magnolia Anderson, age 10-and-a-half months. Her mother told investigators she had taken Magnolia to the bathtub because of a diaper change that needed a little more attention than usual. The mother stepped away to attend to the other children and when she returned to the bathroom, possibly 10 minutes or so later, she found Magnolia unresponsive and not breathing in the tub, which by this time had filled with water. The mother called 911 and initiated CPR.

This investigation will remain open as detectives follow up on information received from family members. Investigators are not sure how the water got turned on. Magnolia’s body has been taken to the Medical Examiner’s Office in Salt Lake where they will examine her tomorrow.

“It’s terribly sad when something like this happens and we urge families to use extra caution,” said Sgt. Spencer Cannon, from Utah County Sheriff’s Office. 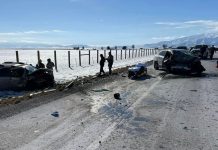 2 in serious condition after head-on crash in Eagle Mountain