EMERY, Utah, March 4, 2019 (Gephardt Daily) — Sheriff officials have released the name of the woman who died in a house fire in Emery Friday.

The deceased has been identified as Markette Eardley, 47, said a news release from Emery County Sheriff’s Office.

The news release said that shortly after noon, dispatch received a call of a structure fire in the town of Emery. Fire crews from Emery, Ferron and Orangeville responded. An ambulance was also paged to the scene.

Once fire crews extinguished the flames and deemed the structure safe for entry, ECSO personnel were able process the scene. Crews then found Eardley, who was deceased.

Preliminary reports show that the fire started in the master bedroom, officials said.

The incident is under investigation by the Emery County Sheriff’s Office, Utah State Fire Marshal’s Office, and the Utah Office of the Medical Examiner. 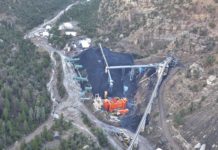