WASATCH/UTAH COUNTY, Utah, March 8, 2019 (Gephardt Daily) — State Route 189 in Provo Canyon is now open in both directions, Utah Department of Transportation said in a tweet at 9 p.m. Friday. An avalanche Friday afternoon had caused the closure of the roadway.

It had earlier been announced by the Wasatch County Sheriff’s Office on Facebook at about 5:15 p.m. that the canyon would be closed so UDOT crews could clean up the avalanche.

It was estimated that the clean-up would take three to four hours.

A tweet from the Utah Department of Transportation gave additional details about the avalanche: “Crews are in Provo Canyon working to clear an avalanche that came down near Bridal Veil Falls. The 30-foot-wide #avalanche covered the WB lanes. Get updates at http://udottraffic.utah.gov  or the UDOT traffic app.”

To see a video showing the scene shortly after the avalanche, click on the player below.

UPDATE:They are closing the canyon in both directions for the UDOT Crews to clean-up the avalanche. They are estimating 3-4 hours for this to take place. Please use alternative routes. There has been another avalanche come down onto SR 189 just south of the tunnels. We are being told by one of our off duty deputies that it has only closed the southbound lanes. (Going towards Provo). Northbound lanes are flowing. First responders are heading that way. Please watch the Utah DOT page for updates. 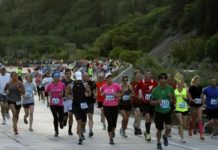 Officials warn of road closures due to Utah Valley Marathon