Murray City Fire Battalion Chief and public information officer Joseph Mittelman told Gephardt Daily the fire, in the area of 6800 South and 75 West, was confined to a room and its contents in the basement, where the woman’s daughter lives.

“It seems to be a pretty small, contained fire in just a section of the room in the house,” Mittleman said. “There’s mostly smoke damage.”

He said smoke was coming up the stairwell when crews arrived.

“That’s always a concern with a basement fire, because the firefighters have to go down through that heat. Once they got down there, they were able to put it out with just a single hose line, with minimal amounts of water.”

Other Stories of Interest:  Morgan residence destroyed by fire

Mittleman said fire crews used water from the tanker, rather than from the hydrant.

Because both of the women who live in the home are older and one is on oxygen, Mittelman said they will spend the night at the home of another daughter.

“We’ll get a restoration company to come get the smoke cleaned up so they won’t have any respiratory problems from it,” he said.

The fire was called in shortly after 4:30 p.m. It was a single-alarm fire, with a two-engine response, and the cause is still under investigation.

“The fire crews did a great job with a quick response and getting the fire out,” Mittelman said. “They had the majority of the fire out within one to two minutes of arrival.” 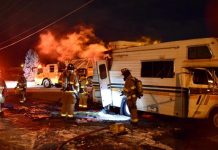