MILLCREEK, Utah, June 16, 2017 (Gephardt Daily) — When a camper went up in flames behind the Hair Company salon at 3625 S. 929 East shortly after 7 p.m. Friday, nearby neighbors were fearful the fire would spread to other properties.

The Unified Fire Authority responded quickly, though, and UFA spokesman Taylor Sandstrom said they had the fire out in about five minutes.

Sandstrom said the RV was fully involved when firefighters arrived. No one was inside the camper at the time the fire broke out, and at 7:30 p.m., investigators were on their way to the scene to determine the cause of the blaze.

Fire crews initially thought it was a structure fire because smoke and flames could be seen reaching into the evening sky. When they arrived and learned it was a camper that was fully engulfed, they canceled additional units.

Gephardt Daily was at the scene before firefighters arrived and spoke with Jennifer Woods, who lives next door to the salon. Woods was worried that her garage, right next door to the camper, might be sparked. “There’s not much in there, but still…,” she said.

Woods said she has lived in her home for 10 years and has three children. When she realized there was a fire, she immediately got the kids out of the house, just in case the flames would spread.

“My aunt lives here (near the scene of the fire), and she’s on oxygen,” Woods said, explaining her great relief when the fire was extinguished so quickly.

No information was available regarding a dollar amount of damage, but it appeared the camper was a total loss. 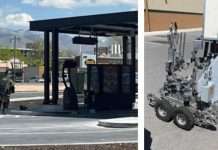 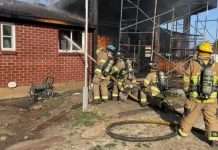