SALT LAKE CITY, Utah, April 1, 2021 (Gephardt Daily) — On Episode 18 of the Bill Gephardt Show, Bill talks with Utah director Holly Tuckett and writer Jennifer Dobner about their most recent project, “Anchor Point,” an award winning documentary film shining a light on the discrimination female wildfire firefighters face while trying to do their job in a male-dominated culture.

Wildfire firefighter Lacey England, one two women focused on in the film, told Tuckett and Dobner she what she loves about her dangerous career.

“There are so many things I love about doing this work,” England told the filmmakers. “I love the way fire smells. I love to go home and still smell the smoke in my braids. I love that it’s never the same. I don’t walk into the same environment every day. No two fires are alike.”

But England faces obstacles her male counterparts most of her coworkers don’t: a male-dominated culture that makes her feel less respected and capable due to her gender. And when battling a potentially deadly fire with your crew members, their respect and support can be difference between life and death.

“The story is universal,” Dobner said, noting that anyone who is not part of the dominant culture can understand being treated as less valuable.

It happens in offices, at work sites, at schools, and not just on blazing mountain tops.

Both Martin and England said all they ever wanted was equal treatment from coworkers with whom they shared equal training, abilities and experience.

In “Anchor Point,” England sums it up:

“I’ve never seen anybody suppress a fire with their penis,” she said. “It shouldn’t hinder me professionally that I don’t have one.”

See Episode 18 of the Bill Gephardt Show, click on the video player below. 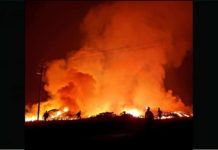