A probable cause statement from the 7th District Court of Monticello said Tiger Jacob Mose was arrested Thursday.

Mose has been charged with:

The arresting officer responded to 744 S. 100 East in Blanding on a report of a man who had been assaulted and needed medical attention, the statement said. The victim had to be transported to the hospital for his injuries; some of the injuries included what appeared to be shallow cuts across his neck and throat area, a broken nose, cuts on his face and a fracture on his eye socket.

“At the same time I was at this residence, the San Juan County Drug Tracker had made contact with another assault victim at a different residence,” the statement said. “I responded and met with a second male victim. This male had a swollen right eye that he could not see out of and a broken nose. There was a distinct design that looked like a shoe print on the right side of his face. The second victim also had bruises on his abdomen from being kicked resulting in a broken rib.”

While at the hospital dispatch paged for medical for a third male victim.

“When I arrived on scene I found a male lying on his side covered in blood,” the statement said. “The male was unconscious but breathing. I also noticed what appeared to be blood splatter on the walls and blood stains on the carpet and couch. Victim number three injuries included a broken nose, broken eye socket, and bleeding in the brain.”

A fourth victim came forward as a witness stating that she had gone to a residence to pick up her boyfriend, the statement said.

“She was taken inside and held with a knife at her throat where she was threatened with her life and the life of her toddler child in the car outside,” the statement said. “Two of the victims identified Tiger Mose as one of the attackers. Each victim stated they were attacked inside a trailer home on East Navajo Drive.”

All four victims were held at the residence against their will by allegedly being threatened by a knife.

“Tiger and one other suspect escorted victim one to his home with the threat of death to victim one and his family if he did not give the suspects the money requested,” the statement said. “As victim one entered his home he was able to shut the door quickly separating him and the suspects and told his family to call 911. An accomplice of Tiger was found in possession of victims number three’s jacket and hat.”

The other suspects were not named in the probable cause statement.

Mose has a previous conviction of a violent felony and is a restricted person, the statement said.

The suspect was transported to San Juan County Jail where he is being held without bail. 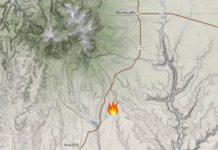