ZION NATIONAL PARK, Utah, Nov. 21, 2019 (Gephardt Daily) — Search and Rescue crews in Washington County have discovered a body that matches the description of a hiker reported missing, whom officials feared had fallen from Angels Landing Trail in Zion National Park on Wednesday.

The body, reported to be that of a 19-year-old woman, was found below Angels Landing, a 1,488-foot tall rock formation.

“A Search and Rescue team started the search at daybreak this morning,” a news release from park officials says.

“The body they located below Angels Landing is consistent with the age and gender of the hiker reported missing. Further information will be released once a positive identification is made and the family is notified.”

The incident was reported at about 5:30 p.m. Wednesday.

Angels Landing had closed Sunday for cleanup after a rockfall. It was reopened on Tuesday. 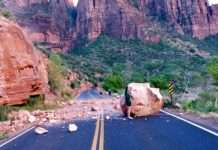 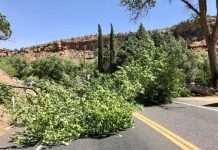