BOUNTIFUL, Utah, May 22, 2020 (Gephardt Daily) — A Bountiful City Police officer traveling home after a late shift Thursday came upon more than a dozen scofflaws toddling down the highway.

“Lots can happen when we are just trying to get home from a graveyard shift,” said a Bountiful City PD Facebook post, accompanied by photos of an officer attempting to herd a flighty flock of fowl.

“Maybe end up stopping to change a tire, pull over a reckless driver who didn’t see us until the last second…. But usually it’s just a gaggle of geese out for a waddle because the goslings are getting restless due to COVID precautions.

“Thankfully ‘Officer Fife’ was able to stay awake long enough to take the time to get these honkers off the big scary road.”

The post also thanked an “Officer Spencer,” who captured the police operation.

“Without her, this glorious moment would not have been captured,” the post says.

“Honk if this makes you happy.” 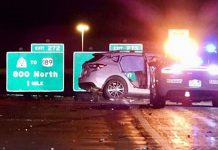