EAGLE MOUNTAIN, Utah, March 10, 2018 (Gephardt Daily) — A 16-year-old boy was transported by LifeFlight to Primary Children’s Hospital in critical condition after being hit by an SUV late Saturday afternoon.

Sgt. Tyler Collet, of the Utah County Sheriff’s Office Eagle Mountain Division, said the boy and a friend were riding BMX-type bikes on the path that parallels Pony Express Parkway.

“They decided to cross the road, and the first boy made it safely,” Collet told Gephardt Daily. “The second boy apparently didn’t see the vehicle coming and was hit.”

Collet said the boy was struck by a Honda SUV.

He suffered severe head trauma and possible internal injuries and was taken by helicopter to the hospital in Salt Lake City.

Collet said the driver remained at the scene and was cooperating with police. Officials do not suspect any type of impairment or negligence on the part of the driver, he added.

“The 911 call came in between 4:45 and 5 p.m. With the nice weather, there were a lot of people out, and several motorists witnessed the accident,” Collet said.

Pony Express Parkway was closed in both directions while the accident was under investigation. It was reopened to traffic at about 7 p.m. 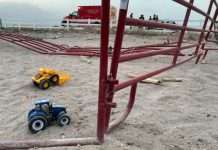