The rally — promoted on social media by a group called Utah March For Refugees — started at the Wallace F. Bennett Federal Building before heading up State Street to the Utah State Capitol. Along the way, they were joined by another group — Mormons for Muslims — which also promoted the rally on social media.

At times, the line of protesters stretched for several city blocks. A Utah Highway Patrol trooper surveying the demonstration from the top of the statehouse stairs told Gephardt Daily that the crowd size rivaled that of the Utah Women’s March, which took place two weeks ago.

“We understand your concern and fear and we know that you are nervous, but we are here to protect you — and we will protect you,” Salt Lake City Mayor Jackie Biskupski told the fired-up, overflow crowd that packed the rotunda and all three floors of the State Capitol Building. “You will always be welcome in Utah’s capital city.”

Community activist Kate Kelly — one of the organizers of the Utah Women’s March on Washington, D.C., said she was heartened by the size of the crowd.

“I think it’s fantastic,” Kelly said. “I think the turnout today to me demonstrates this is the new normal and that people are getting fatigued. They’re digging in. Their showing up and really getting into being engaged. The rallies are very positive, optimistic, really fighting hate and fear with the opposite — with love and courage — so I’m very impressed.”

“I think today’s turnout has also shown that immigrants and refugees are welcome in Utah,” Kelly said. “The majority of people want them to be here. They really enrich our state and our culture. I think they need to know we want them to be here and that we’ll stand up with them and protect them.”

Salt Lake City residents Jeff Colder and Lianna Lopez echoed Kelly’s sentiments. They told Gephardt Daily the respectful tone of the demonstrations would be key to their success.

“You can’t do it with violence,” Colder said. “You’ve gotta keep it peaceful. That’s how you effect change. Otherwise, it will detract from your message. And so the tone today has been nothing but love.”

“It’s a beautiful thing. It’s been really amazing — the people, all the kids here, families of all colors that are supporting this. It’s awesome. Especially for Salt Lake City. I’m from California where you might expect this, but here — it’s blowing my mind just a little bit. It’s making me excited.

“The message is love everybody,” Lopez said. “The best sign we saw all day was being held like a 3-year-old. It said ‘Be nice.’ It was wonderful.”

While its size paled in comparison to the Salt Lake City protest, an estimated 300 marchers took the streets of Ogden Saturday to take Mr. Trump to task.

“I am here because this is just so wrong to try and ban people,” said North Ogden resident, Patty Halling, “particularly from countries that, well, mostly because of their religion. But it became very obvious that it was from countries that Donald Trump doesn’t have any businesses in. And the countries where we have proved that terrorists have attacked Americans and he has businesses there was no ban.

“I think Donald Trump is in it for himself,” Halling said. “I truly do.”

Navy veteran Collin Chandler also hit the street Saturday in Ogden Saturday. He said taking part in a smaller town protest was as important as any big city march.

“Everybody needs to know there’s resistance to what’s going on everywhere,” Chandler explained. “There’s support for people who are being oppressed and discriminated against and marginalized everywhere.

“I took an oath to this country and that oath was to support and defend the Constitution. The fact that I don’t wear the uniform anymore doesn’t change the fact that I took that oath. And our constitution is under attack. It’s under attack by some very determined and slightly psychotic. So no, we all need to do what we can to stand up to that.” 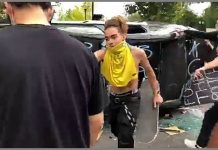 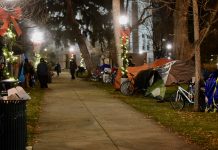 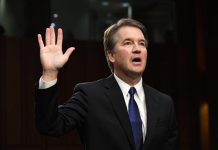