More than 30 firefighters from five agencies plus the two stations of the North Davis Metro Fire District were dispatched to the high school at approximately 12:40 a.m. after smoke and flames were reported coming from the building’s roof.

Chief Mark Becraft from the NDFD told Gephardt Daily his agency first received a fire alarm notification from the school.

When first responders arrived, they found a fire at the far east side of the structure with smoke pouring from the roof.

Firefighters gained entry to the 53-year-old building, and it took them about 45 minutes to control the blaze and to make sure it had not spread into the building’s interior.

The fire broke out in an area of the school that had undergone extensive renovation in recent weeks.

Becraft said the investigation has determined the fire was likely started because on site roofers were welding, working on extending a duct through the roof, and there was some lagging, or insulation, that was exposed to heat and continued to smolder after roofers left.

He added that initial speculation that the fire could have been caused by a lightning strike was not correct. In fact, the rain that accompanied the storm that night most likely helped keep the fire in check.

He said the only damage was to the roofing material and is estimated to be approximately $10,000. One classroom did experience some smoke and water damage, according to Becraft, but that damage was not extensive.

He said the classroom will be able to be used when school starts back up Aug. 24.

Becraft praised the agencies that worked together to quickly bring the fire under control.

“It’s seamless here in Davis County,” he said. “We can’t do it by ourselves. We have to work together. And it works seamless.”

One firefighter had to be treated at the scene for a minor arm injury. 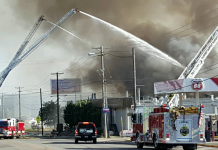