KEARNS, Utah, Feb. 7, 2021 (Gephardt Daily) — Police responded Saturday night to a report of a domestic incident in which a man was said to be holding a gun to his 15-year-old grandson’s head and threatening to kill the boy.

Sgt. Melody Cutler, with the Unified Police Department, said the call was received just before 8 p.m., and officers from UPD and West Valley City were dispatched to the home at 5706 W. China Clay Drive.

When officers arrived, two shots were fired from the house, Cutler said.

The man’s wife and their four grandchildren, ages 10 to 15, were able to get out of the home and escape to a neighbor’s house.

The man had barricaded himself inside the home, so SWAT and a negotiation team were notified and responded to the scene.

People in the immediate vicinity were advised to shelter in place.

“As SWAT was arriving and beginning to take containment of the house, the man came out, as he had done about three times prior to this, yelling at officers,” Cutler said. “This last time, he came out, pointed his gun and fired additional shots at officers, and that’s when officers fired back at him.”

The man was struck and died at the scene. No officers were injured during the incident.

Cutler said three officers were involved in the shooting — one from UPD and two from West Valley City.

Protocol in an officer-involved critical incident requires that the investigation be conducted by an outside team, which in this case is Team 1, Cutler said. Team 1 was already on scene.

Cutler said the two grandparents and four grandchildren have been living together in the home, and there is no recent history of any domestic violence there.

Investigators will be interviewing everyone who was in the home in an attempt to determine exactly what led up to the violent incident. 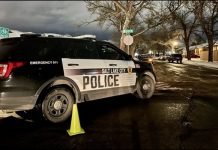