Unified police Lt. Lex Bell said officers were called to a home near 4900 W. 13900 South just before 3 p.m. after the the child’s father found the child inside the car when he came home from church.

“The mother, who had come home sick from church and brought the 1-year-old with her,” Bell said. “The mom ran inside the home and had forgotten the child was still in the car.”

Bell said when the father and the other children came home, they noticed the child was missing and they ran outside and found him in the car and called 911.

“Paramedics arrived to find the child pulled out of the car and described his behavior as lethargic and his core temperature was 105 degrees,” Bell said. “They also took the temperature from inside the car and it was 154 degrees.”

The child was taken to Intermountain Medical in Riverton in critical condition and then flown by medical helicopter to Primary Children’s Hospital.

As of 5 p.m. the child’s condition was upgraded to fair and he is expected to recover. 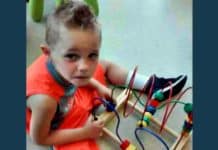