The new health orders include a mask wearing mandate statewide requiring business employees and their patrons to don masks; those businesses failing to comply will face fines by the Utah Department of Labor.

Utah social gatherings also are being restricted, limited to members of the same households for the next 14 days.

Afterschool social gatherings are being postponed or canceled, including a number of planned sporting events.

Part of the state’s response will include expanded testing across the state.

To hear Gov. Herbert’s statement in its entirety, click on the video player above. 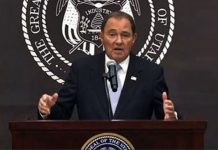