The suspect is alleged to have stolen a gumball machine from the pediatric area of CopperView Medical Center at 3556 W. 9800 South in South Jordan on May 13 after smashing a front window in the office.

The suspect was captured on surveillance video loading the gumball machine into a vehicle.

“A little background on this bandit … a West Jordan Police detective while investigating a theft case, observed this news story and immediately recognized the suspect. While searching the suspect’s home in an unrelated West Jordan case, two large bowls of gumballs were observed.”

At the time, the gumballs did not prove of any significance until the following morning when the news of the gumball machine theft was announced.

“The suspect has since been charged with felony theft and criminal mischief out of West Jordan,” the Facebook post added. “He has a lengthy criminal history regarding thefts, frauds. South Jordan Police Department was happy to get this information. It is sometimes crazy how things work out. We love to push information out to get this type of assistance.”

The suspect has not been identified at this time. 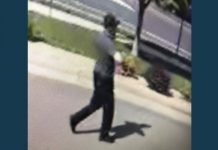