FRUITLAND, Utah, Dec. 8, 2021 (Gephardt Daily) — A brilliant flash of light followed by the low, rolling sound of a distant explosion – an event that lasted for nearly a minute – had residents across Duchesne County staring at the sky early Monday night and asking that age old question, “What the heck was that?”

While it took 24 hours to verify, folks online seemed to have a pretty good hunch what it was they’d witnessed.

“BIG METEOR just went over Fruitland airspace and exploded about 20 minutes ago,” wrote Andrew R. “Seriously, about one minute later a BOOOOooooomm… the sound lasted about a minute long itself. Did anyone catch it on camera?”

“Huge shock wave at my house in Duchesne,” wrote Tad T., in a message to Gephardt Daily. “Others heard and felt it too. Any ideas? Been some comments about an exploding meteor over Fruitland,” he wrote.

“I was outside taking my garbage out. It sounded like thunder, sonic boom,” wrote another social media user. “Directly above us it sounded.”

While many said they witnessed the event, others were oblivious, including emergency dispatchers who told Gephardt Daily they were unaware of any calls about sounds of an explosion or fire in the sky.

Workers at The BIG G on 40 – Gas Station, Cafe and Grocery, in Fruitland, not only witnessed the spectacle, they seemed awestruck by the experience.

“Oh, yeah, we saw it alright,” said the woman who answered the phone. “It was big, big and bright. It was a big bright light, and it kind of looked like a thunderstorm — only bigger!”

Not only did the light fill the sky, the ground shook and rumbled like an earthquake, she said. “It lasted for like 50 seconds.”

Social media users in Fruitland, Duchesne, Cedarview, Tabiona and Altamont reported the event Monday night. By Tuesday, there were online reports from 8 western states describing the meteor sighting, including those posted on the American Meteor Society’s ‘Report a Fireball’ forum. 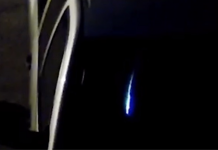