LOGAN, Utah, March 21, 2021 (Gephardt Daily) — A Cache County Jail inmate who escaped from the facility’s recreation yard Sunday morning was back in custody about an hour later.

Some inmates given recreational time were in a fenced area outside the recreational area, a statement from the Cache County Sheriff’s Office says.

“At 11:17 hours, an inmate identified as Cecil Vigil, a 37-year-old male, scaled the recreation yard fence and outer perimeter fence and ran from the area,” the CCSO statement says.

“Corrections deputies attempted to apprehend Mr. Vigil, but he was able to escape and ran into fields next to the jail. Law enforcement officers from both Cache County Sheriff’s Office and Logan City Police Department responded to the area and set up a large perimeter, keeping the escapee in sight.

“The escapee attempted to evade capture by removing his outer clothing and also by arming himself with a board, but due to the rural area that he was in, officers were able to keep him in sight and away from any citizens. Law enforcement officers were able to communicate with him from a distance, and after just over one hour, convinced him to return to custody.”

Once in custody, Vigil was examined by medical staff and returned to the Cache County Jail, the statement says.

“This incident is being investigated by law enforcement and additional charges will be reviewed by the Cache County Attorney’s Office.

“The Cache County Sheriff’s Office would like to thank the large and coordinated response by local law enforcement agencies. Through the cooperative effort of all responding officers, this individual was able to be safely taken back into custody.”

The officers arrived intending to interview Vigil about  an an earlier shooting in Mexican Hat. Neither officer was hit by any bullets.

Vigil was taken into custody on May 3 while walking along Highway 160, south of Towaoc, Colorado, which is located south of Cortez, on the Ute Mountain Ute Indian Reservation. 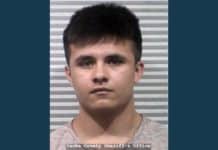