LOGAN, Utah, Feb. 18, 2020 (Gephardt Daily) — A Cache County man charged with voyeurism after he admitted using his phone to record a woman preparing to enter a tanning booth at the gym where he worked has accepted a plea deal.

Tyson Hadfield, 31, will serve no more than a year in jail for the crime, according to the deal.

Logan Police officers were dispatched to the scene after receiving a call on Sept. 23 of last year from a 19-year-old woman.

The victim claimed she had witnessed an unknown individual holding a phone over the the gap between the tanning booth wall and ceiling,” the probable cause statement says.

“The area where the victim claimed she saw the phone recording her is an area only accessible by employees of the establishment. It was determined that at the time of the alleged incident only one employee was on duty. That employee was identified as Tyson Hadfield.

“Tyson was interviewed regarding the incident and admitted he had intentionally filmed the victim while she naked from the waist up. Tyson showed officers how he had used a chair and mini fridge to prop himself high enough to gain access to the gap between the wall and ceiling.”

Hadfield is scheduled for sentencing on March 30. 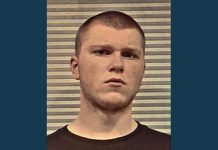