SALT LAKE CITY, Utah, May 17, 2021 (Gephardt Daily) — Police investigators are trying to piece together the chain of events that led to a car crashing into a ditch in the Salt Lake City Cemetery Sunday night just minutes after a bullet was fired through the window of an  Avenues home. No one was injured inside the residence.

Officers first responded to the area about 9:12 p.m. after emergency dispatchers received multiple calls of shots fired and a woman screaming near 200 North E Street.

Salt Lake City Police Lt. T. Stumm told Gephardt Daily at the same time dispatchers received the calls of shots fired there were other reports of vehicles fleeing the area.

Responding officers soon came upon a car with three juveniles inside, which had driven into a ditch in the Salt Lake City Cemetery.

No one was injured in the crash and the juveniles were detained for questioning, Stumm said.

“There was one shot that went through a (house) window, but no one was injured. We called around to hospitals, and no one showed up with injuries,” according to Stumm.

“About four cars appeared to be involved, from what callers told us. We don’t know if this one in the ditch was one of those four, or if it was a fifth car.”

The search for suspects is ongoing. 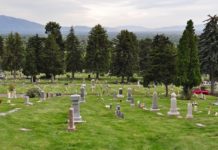