“We got the call at 9:30 last night of a vehicle inside a residence,” Lt. Jeff Conger, West Valley City Police Department, told Gephardt Daily. Officers responded to the area of 2700 South and 2800 West.

The car was half inside, half out, Conger said. The residents were unhurt, he said.

“Officers observed the driver walking around, not responding,” he said. “Medical crews responded and spoke to the driver, who was intoxicated,” Conger said. “That’s the reason for the crash.”

The residents had to evacuate the residence.

“The house was damaged, and was closed to occupancy,” Conger said. “It was too unstable for the occupants to stay.”

Blood was drawn from the driver, and it’s likely he will faces charges, Conger said, adding he didn’t know if charges had been filed yet. 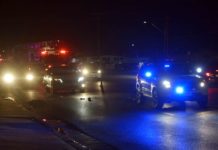 Granger High School to pivot to online learning through Dec. 2