CEDAR CITY, Utah, Nov. 7, 2020 (Gephardt Daily) — A Cedar City babysitter is in FBI custody after officials say she kidnapped a 5-month-old infant and took him to Denver.

Cedar City Police Department officials shared details about the baby boy’s recovery and the woman in whose care he was left.

“On Nov. 6, at approximately 10 p.m., Cedar  Communications received a call from a young mother regarding her three children, ages 5, 1 and 4 months, not being returned from the babysitter’s home,” the Cedar City Police statement says.

“The babysitter has been identified as 31-year old female, Emily Marissa Luciano. The mother agreed to allow the children to spend the night with Mrs. Luciano and expected them home this morning. Mrs. Luciano continued to provide excuses to the mother about the delay in returning her children.

“It was later discovered that Mrs. Luciano dropped the five and one-year old children with a third-party and then left town and traveled, with the 4-month-old infant to the Denver Colorado area.”

This was done without the mother’s knowledge or permission, the statement says.

“The older children were located, unharmed and safely returned to their mother.

It was determined that the infant, identified as Peyton Everett Caraballo-Winston, was in imminent danger and an AMBER Alert was issued.”

Investigators were able to communicate by phone and text with Luciano, the statement says, “however, she consistently provided deceitful and inconsistent statements to officers and was not cooperative with the investigation.”

Investigating officers worked closely with the National Center for Missing and Exploited Children along with agents with the Federal Bureau of Investigation.

“As a result, the infant and Mrs. Luciano were located at the Denver International Airport and detained,” the Cedar City Police statement says. “Mrs. Luciano is currently in FBI custody awaiting further legal proceedings and the infant was found unharmed and is safe. The infant is in the custody of FBI Victim Services and arrangements are being made to reunite the infant with his mother.

“We are thankful for the collaboration and great working partnerships of the many agencies who assisted with this investigation.” 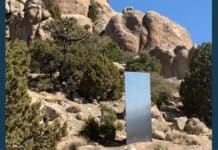 New monolith found in Utah outback, this one with pop-out drawer, cryptic message 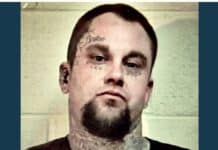