Iron County prosecutors say Cabrera first messaged the police officer about 4:30 p.m. Sunday, saying he “was going to pay the price for what he did to his father.”

In follow-up messages to the officer, Cabrera stated, “talk s— get smoked I’ll see you soon,” and later added, “you will be smoked the f— out before you can pull your little deputy weapon,” according to charging documents.

In later messages, Cabrera tells the officer he “will f— him up without his duty belt on” and made statements about having been outside the officer’s parents’ house, the charges state.

“Cabrera then states he will see him very soon,” prosecutors allege, noting the threats were directed at the officer, as well as the officer’s mother and sister.

“Because of this, it put the officer, their mother, and sister in fear of their lives,” charges state.

With the SWAT team outside the trailer, police say Cabrera again messaged the Cedar City police officer. After about 30 minutes, he exited the trailer and was arrested.

Cabrera was booked Monday into the Iron County jail, where he’s being held without bail. He was charged Tuesday with: 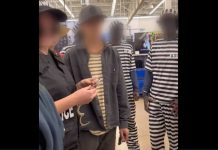