CENTERVILLE, Utah, May 12, 2018 (Gephardt Daily) — Centerville police have identified the suspect they are looking for in connection with a home burglary that occurred Thursday. They are also seeking a female “person of interest” in the case.

The suspect has been identified by police as 41-year-old Donald Shane Andrus.

According to a news release from Centerville police, Andrus is wanted in Colorado for a parole violation and Nevada for a weapons offense.

“Donald is also considered to be a flight risk,” the release states. “Because Donald has violent tendencies and is considered armed we are asking the public for any tips that may help us locate him.”

In a news release Thursday, police said a Taurus 9 mm semiautomatic handgun in a small black case was stolen from the home, in addition to a bicycle.

Andrus is 5 feet 11 inches tall, and weighs about 160 pounds. He has blue eyes and brown hair.

Police are also looking for 43-year-old Stephanie Didericksen as a person of interest.

“She pawned the bicycle that was stolen in the residential burglary in Centerville,” the news release says.

“We would like to speak with her to determine what information she could provide us about this case. Stephanie has ties to the Bountiful area.”

Anyone with information that could help locate Andrus or Didericksen is asked to call Centerville Police Detective D. Davis at 801-677-6427. Anonymous tips are welcome. 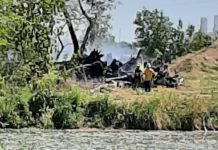