Rep. Jason Chaffetz, R-Utah, chairman of the House Oversight Committee, said in a letter to Justice Department Inspector General Jason Horowitz the ongoing probe into how the department handled its 2016 investigation into Hillary Clinton‘s private email server should be expanded.

Deputy Attorney General Rod Rosenstein wrote in a letter to Trump earlier this week that Comey’s handling of the Clinton email investigation had led employees at the FBI and elsewhere in the Justice Department to lose faith in Comey’s ability to effectively lead the nation’s top law enforcement agency.

“I request that you expand the scope of your office’s ongoing review of allegations regarding certain actions by the Department of Justice and the FBI in advance of the 2016 election to include the facts and circumstances surrounding the removal of Director Comey,” Chaffetz wrote. “You separately stated ‘if circumstances warrant, [your office] will consider including other issues that may arise during the course of the review.’ The recommendation to remove Comey indeed warrants such consideration.”

Democrats have doubted Trump’s explanation for the decision, noting Comey’s other ongoing investigation into the 2016 election, pertaining to Russia’s hacking — and whether any Trump campaign officials played a role in it. 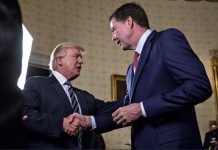