SALT LAKE CITY, Utah, Sept. 5, 2022 (Gephardt Daily) — Charging documents filed against Deng Mawut Buk, believed to be one of three people involved in an altercation that left one man dead outside the Salt Palace Convention Center, reveal new information about the incident.

Two other suspects, including the alleged shooter, remained at large as of Monday morning, two days after the Saturday afternoon shooting.

“Multiple callers stated they had seen a male chasing another male with a gun and a male
had just been shot and was down in the street,” says a statement filed by an officer of the Salt Lake City Police Department.

“Witnesses stated suspects had run in an underground parking lot. The victim was transported to the hospital where he was pronounced dead from a gunshot wound.”

The victim, identified as 41-year-old Deliford Knight, flew with friends from Florida to Salt Lake City to attend the traveling convention, Sneaker Con.

“In an interview with the friends, detectives learned they traveled to these conventions utilizing a ‘shell game’ to defraud people out of money,” Buk’s affidavit says. “The A/P (arrested person) was with two other suspects, one of which played this game and lost money to the victim. The suspect who lost money became angry and followed the victim out of the Salt Palace and into traffic on West Temple.

The three suspects then ran north, into a parking garage, and left in a vehicle, the police statement says.

“Witnesses were able to provide a vehicle description and license plate. Detectives also were able to locate surveillance video as well as cell phone video of the fight as well as the events leading up to it.”

Buk, 22, was tracked to a local address, and a SWAT team served a search warrant, the statement says.

“The A/P was interviewed and admitted to cutting his hair in an effort to avoid
detection. The A/P also admitted to being involved in the assault.”

Buk was booked into the Salt Lake County jail system on charges of aggravated robbery and murder, both first-degree felonies. He is being held without bail. 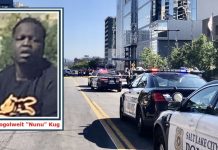