Firefighters arrived at the vacant, two-story, commercial structure at about 8:25 p.m. and reported a “primary all clear” about 20 minutes later.

Ogden Fire Deputy Chief Mike Slater told Gephardt Daily that heavy smoke and flames were coming from the front of the structure, and fire crews made an aggressive attack to extinguish the blaze.

Slater estimated that the fire caused $30,000 in damage, and said it’s possible that it was caused by transients sheltering in the building. No one was inside when fire crews arrived.

Seventeen firefighters from Ogden responded to the scene, with two engines, two ladder trucks, a paramedic truck, an ambulance and the battalion chief. A unit from Riverdale also assisted. 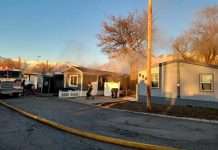