OGDEN, Utah, May 30, 2020 (Gephardt Daily) — Representatives from law enforcement and emergency service agencies across the Wasatch Front, as well as area residents, turned out to pay their respects Friday as the body of Ogden Police Officer Nate Lyday was brought from the Medical Examiner’s office in West Valley City to a mortuary in Ogden.

Officer Lyday was fatally shot the day before, when he and his fellow officers responded to a report of domestic abuse in Ogden. The caller said her husband was threatening to kill her. She feared for her life. Then the phone went dead.

When the officers arrived, the man was on the porch of the home, on the 300 block of Jackson Avenue. He ran back inside, slamming the door. Lyday and a parole officer went to the porch, and that’s when the suspect fired through the door, with bullets striking both officers, police officials said. The parole officer survived, but Officer Lyday was mortally wounded.

A son of Ogden

Officer Lyday’s father worked in law enforcement in Davis County, and his brother is a code enforcement officer for Ogden City.

The young officer and his wife were about to celebrate their fifth wedding anniversary.

He had been a police officer for 15 months.

On Friday, American flags lined Lincoln Avenue and the perimeter of the Francom Public Safety Building, and a large flag was suspended at the 22nd Street intersection by two aerial fire trucks.

Flowers were placed on and beside the fallen officer’s police car, and sentiments — love, hope, honor — were written in brightly colored chalk on the sidewalk.

On 22nd Street, across from the Francom building, the windows of DaVinci Academy were decorated with hand-drawn hearts and expressions of love and sympathy for the family of Officer Lyday and the Ogden Police Department.

The mood was somber, and even young children placed their hands over their hearts as the procession of motorcycles, police cruisers, unmarked cars and vans came into view, all with lights flashing and sirens silent.

And after the procession wound its way down Lincoln to 22nd, and east on 22nd until it turned and disappeared onto Washington Boulevard, the crowd slowly, quietly dispersed.

Firefighters regrouped at the fire station, toddlers blinked in the bright sunlight as their parents pushed their strollers and tried to remember where they’d parked the car. People put their cameras away, or phoned their family members to tell them they’d be home soon. And many in the crowd threw social distancing to the wind as they put a comforting arm around a neighbor or hugged a friend good-by.

The procession had ended, but Officer Nate Lyday will not be forgotten by the countless people who knew, loved and respected him, or by the city to which he gave his life in service. 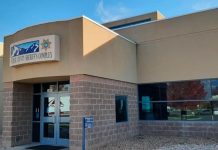