PLAIN CITY, Utah, Oct. 18, 2016 (Gephardt Daily) — An 18-year-old man who dressed up to look like a clown with a machete so he could prank his friends ended up trying to explain the joke to Weber County Sheriff officials.

It didn’t work. The teen got a serious talking to and a ticket for disorderly conduct.

“Dispatch started getting multiple calls at about 5 p.m.,” said Sgt. Matt Jensen, Weber County Sheriff’s Office spokesman, of the Tuesday incident. “The man was dressed as a clown, wearing a clown suit and a mask, and holding what appeared to be a machete.

“He approached one truck he believed was his friends, but it was a man with his two kids. It really frightened them.”

Deputies responded to the scene, near Plain City Elementary School, which is at 2335 N. 3600 West.

“They made contact with him, and he stated he was playing a prank on his friend,” Jensen said. “He realized it was probably not the smartest thing he’s done.”

The teen, who lives in Plain City, will have a fine to pay, and most likely a court date to keep, Jensen said, but on Tuesday was released from the scene.

Area residents were probably more afraid of the “clown” because of the plastic machete, Jensen said.

“People saw what could have been a weapon He was not only dressed as a clown, he was carrying what appeared to be a weapon.”

The clown incident follows multiple clown-themed Internet threats to local schools, which have resulted in numerous lockouts and investigations by police.

Scaring people with images of scary clowns is an Internet prank that reportedly began in the Southeast and has spread across the nation. Several people dressed as scary and threatening clowns have been arrested, primarily in the Eastern U.S.

“This clown thing is driving me nuts,” Jensen confessed. “If people are dressing up like clowns for no legitimate purpose, creating fear and alarm, they can be cited and arrested due to their actions.” 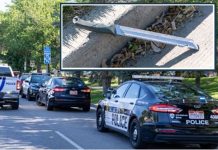