MOAB, Utah, Sept. 13, 2017 (Gephardt Daily) — A Moab man drowned in the Colorado River Wednesday morning while attempting to save a young family member during an outing, officials said.

The victim was identified as James Laverne Gregoire, 70, the Grand County Sheriff’s Office said in a news release.

The incident occurred just after 10:35 a.m. in the river about seven miles from Moab, along State Route 128 in an area known as Nude Beach.

“Mr. Gregoire was with family members on an outing on the Colorado River,” the news release said. “A young family member wearing flotation devices went too far out from the shore and Mr. Gregoire swam out to bring him back to shore.

“Mr. Gregoire yelled that he was having cramps and went under water and did not surface. The child made it back to shore safely.”

Responding units including members of a dive team with the Moab Fire Department, who initiated a search of the river for Gregoire. The victim was located at 11:54 a.m. by a member of the dive team.

Gregoire was found at a depth of 10 feet approximately 30 feet from shore and in the area where he went under water, the news release said. 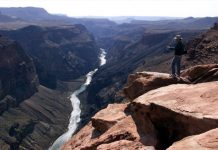