CEDAR CITY, Utah, Dec. 28, 2020 (Gephardt Daily) — A Colorado woman has been arrested after a high-speed chase on Interstate 15 in southern Utah Sunday morning.

A probable cause statement from the 5th District Court of Iron County said Amber Lee Butler, 37, is facing charges of:

On Dec. 26 at approximately 11:30 p.m., the arresting office was sitting in the median of I-15 near mile marker 70 in the Cedar City area observing traffic when he saw a northbound vehicle visually estimated at 100 mph. It turned out the vehicle was traveling at 96 mph.

“I activated my emergency lights and pulled out to initiate a traffic stop,” the arresting officer wrote. “After about one minute I noted that the vehicle was not slowing down but had actually accelerated and I was slowly gaining on the subject vehicle; I was traveling about 130 mph in my patrol car.”

The pursuit continued north on I-15 at a constant speed of 130 mph until the vehicle was spiked by a UHP trooper near mile marker 103. The vehicle continued at speeds near 130 mph as the front right tire began to disintegrate, the statement said.

At this time three individuals, Butler and two juveniles, ran on foot. The individual later identified as a juvenile offender out of Colorado was taken into custody. While the foot search for the individuals continued, the arresting officer returned to the vehicle to search for possible identification of the occupants, and located a Colorado identification card for Butler, and an insurance card in a male’s wallet which identified the juvenile who was not yet in custody.

Butler’s information was run by Cedar dispatch and they advised that her driver’s license was revoked for being a habitual traffic offender. Also allegedly found in the vehicle was a plastic bag which contained .22 caliber, 9mm, and .45 caliber ammunition. The first juvenile taken into custody advised officers that he had been in possession of a .22 caliber handgun when he left the vehicle and that he threw it into the field prior to crossing the deer fence, but never retrieved the handgun.

A Ruger semi-automatic handgun was later located by a trooper and his K-9 partner. It was allegedly fully loaded with a round in the chamber. The first juvenile also advised officers that the other male juvenile, whose name matched that found on the insurance card, was in possession of a .38 caliber handgun. This second juvenile was taken into custody several hours after the end of the vehicle pursuit, but was not in possession of the handgun.

A .38 Special revolver with a fully-loaded cylinder was later found in Beaver as well as a dollar bill which was folded up and contained a white powder consistent with cocaine.

After being read her Miranda rights, she said she was aware of the fact that her son, the juvenile who was taken into custody second, was on juvenile probation and was responsible to a probation officer. She also said that she was aware of the handguns which were in possession of the two juveniles. It was found that the first juvenile taken into custody had a no-bail, full extradition warrant out of Colorado.

A Colorado detective advised they were investigating the two juveniles for a string of bank robberies and when they advised the juveniles that their probation officer wanted to speak with them they left the residence, which was under observation, with a female and climbed into the black BMW the officer had pursued and which the three individuals fled from.

Denver police lost the vehicle headed westbound on I-70 on Dec. 23.

Butler was transported to Iron County Jail, where she is being held without bail. 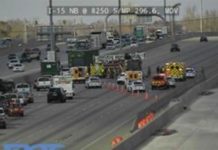