SALT LAKE CITY, Utah, March 1, 2016 (Gephardt Daily) — The loss of Benjamin Teiko Fonua, a man many say lived his life giving back to others, came as a shock to friends and loved ones who gathered last week to show support to his family.

Benjamin, 37, also known as “King Benjamin”, “Big Ben-Benny” or “DJ BenJammn,” was known for his generosity and community involvement. He passed away on Feb. 17, his wife’s 39th birthday, from complications following heart surgery.

The news of Benjamin’s passing spread quickly throughout the community and people from all over the valley jumped in to help Ben’s wife and their five children.

Benjamin’s cousin, Marcus Fonua, said everyone really came out to support the family.

“He has five kids and a wife and everyone here is showing some love for them,” Marcus Fonua said. “He was well known as a DJ and performed at a lot of music events, and so many people outside the family knew who he was.”

Marcus Fonua said people around Benjamin assumed he might be intimidating because of his size, but he was just a big teddy bear.

“A lot of people love and respect Big Ben,” Marcus Fonua said. “He was involved with Little League football at Granger, West and Rose Park. His Granger Gremlins just recently won the championships. He had a big pull all over the valley and was very involved in the community.”

Benjamin earned his nickname “DJ BenJAMMN” from the many times he provided DJ services for events including weddings, medical fundraisers, family reunions and neighborhood gatherings.

Marcus Fonua said the fundraising event they planned for the family was supposed to be at Marcus’ home in Rose Park, but after realizing how many people were going to attend, his brother, also named Ben, reached out to someone he knew at The Complex.

“They allowed us to use the parking lot and it turned out to be even bigger than we actually thought it might be,” Marcus Fonua said. “I am so glad someone helped us with the event center, this is such a great community.”

“It means a lot to me, to my family. The support and the love that everyone has shown to myself and my kids,” she said. “All he wanted to do was service, service, service, all the time, anything he could get involved in and give.”

Benjamin grew up in Rose Park with his seven siblings, including a twin sister. He worked for Dawn’s Foods for 15 years, and served as security for several events in Salt Lake City.

Benjamin and his wife were married just shy of 18 years and have five children, Funaki, 13, Lavinia, 12, twin boys Sebastian and Mailemounga, 9, and andKaloni, 4.

Funeral services for Ben were held on Feb. 27 in Rose Park with graveside services at Redwood Cemetery.

A GoFundMe account was also established to continue in helping the Fonua family. 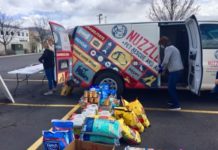