SALT LAKE CITY, Utah, Feb. 12, 2019 (Gephardt Daily) — Community members are rallying in support of a restaurant owned by Utah State Senator Derek Kitchen and his husband Moudi Sbeity after they say their pride flag was vandalized.

Kitchen (D-Salt Lake City) and Sbeity own Laziz Kitchen at 912 S. Jefferson St. The two posted a photograph to Facebook and Instagram Tuesday saying the flag, which was hanging above the door of the business, was torn down Monday night.

“Last night, somebody decided to tear up our pride flag,” the post accompanying the photo said. “They mounted one of the chairs we had locked up outside onto a table and went for it. It’s so sad to walk into a place I love under such a jarring banner of hatred, but it won’t stop us from buying another flag and standing tall. This is a place of love, acceptance, tolerance, and community.”

The post went on: “So many of you have been kind enough to offer to replace our flag, and we can’t help but swell up at the loving gesture. We only need one, but we will be gladly accepting pride flag donations to share with other businesses and people who want to proudly fly one above their doors.”

Kitchen, a South Jordan native, was first elected to the Salt Lake City Council in 2015. He was elected to serve as a member of the Utah State Senate in 2018, representing District 2. He attended the University of Utah, studying political science and Spanish. In 2012, he started his own business, Laziz, with Sbeity, focusing on Middle Eastern food production. Sbiety moved from Lebanon to Utah in 2006 to pursue his education, and subsequently met his now husband Kitchen.

Kitchen also served as a plaintiff in Kitchen v. Herbert, a lawsuit that brought marriage equality to Utah. 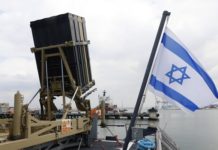 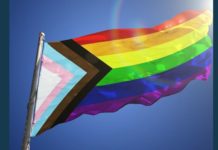 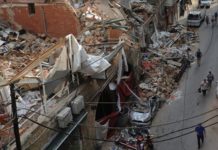