ST. GEORGE, Utah, Aug. 19, 2018 (Gephardt Daily) — As the third anniversary of Macin Smith’s disappearance approaches, family and friends are planning a comprehensive search in St. George they hope will provide some long-awaited answers.

Macin went missing from his home in St. George at age 17 on Sept. 1, 2015. He walked away early in the morning when his parents thought he was on his way to school, and vanished without a trace. He would now be 20 years old, and though there have been many possible sightings of him, none has yet proved credible.

Now, his mom, Tracey Bratt-Smith, dad, Darrin Smith, and uncle, Keith Bratt, have joined forces with members of Macin’s Army, the name given to the 56,612 people who follow the Help Find Macin Smith Facebook page, to organize a search for the teen one week after the date he went missing, on Saturday, Sept. 8.

Jolyne Gailey, one of the search organizers, spoke with Gephardt Daily about the search.

“About six months ago we chose a location that we wanted to re-visit,” she said. “Even though this area was previously done the week Macin went missing, there are a lot of things that families and search parties don’t think of during tragic moments. This time around we have planned a singular search with a mass of volunteers, and our goal is to comb the areas as thoroughly as possible to find evidence or clues.”

Gailey said the organizers have been confirming volunteers and donations for approximately two months, and that will continue until the search date.

“We plan to be equipped for as many people who can come to help,” she said. “If people are on Facebook we encourage them to join our page ‘Help find Macin Smith’ and to RSVP to the event; that way we can be aware of who plans to come and what donations they can possibly bring. There are going to be areas and levels for all types of volunteers. We have people bringing horses, four wheelers, and walking on foot. All levels of expertise are welcome, however, please remember it is going to be extremely hot and we are in the desert.”

If people are not able to search, volunteers are also needed to pass out water and check people in and out at the sign-in booth.

Gailey said numerous members of the Bratt-Smith family will be among the searchers, including some of Macin’s siblings and family members from other states and Canada.

She added that though there is a feeling of optimism as the search date approaches, this time of year is also extremely emotionally taxing for the family.

“I cannot fully speak for Tracey on this one, however, I know that she is emotionally overwhelmed right now,” Gailey said. “As for the organizers, we are desperately hoping for a miracle. The feeling is bittersweet. If Macin is out there, we would like this to be the last search, we wish to bring him home and try to find a little closure and peace in the situation. I am hoping that the turnout is enormous and that we are able to cover huge amounts of ground.”

Gailey said that at the time he went missing, his family fully expected he would come home within a week. “I don’t think any of us ever anticipated to be here,” she said. “Family members have expressed that they expected Macin to be home within a couple of days of blowing off steam or a week at the most. The most horrifying emotion throughout all of this is simply not knowing.”

Those who do not have Facebook to RSVP to the event can show up the day of the search, Sept. 8, at 8 a.m. at 3000 E. Banded Hills Drive in St. George, where Macin’s Army signs will be posted.

Gephardt Daily will be at the search and will provide coverage throughout the day. 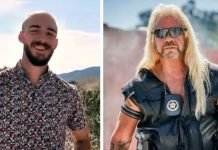