Murray Fire Department Captain Travis Bodtcher said crews were dispatched at 8:57 p.m. and on arrival smoke and flames were showing on the south side of the building going through the roof.

Crews made a defensive attack on the abandoned building, Bodtcher said, but will not send personnel inside until daylight.

“You will see smoke in the area throughout the night but we will have crews here tonight watching the fire,” Bodtcher added.

No one has been injured as a result of the blaze.

At this time there is no exact extent of damages, Bodtcher said.

The cause of the fire is not known at this early stage. 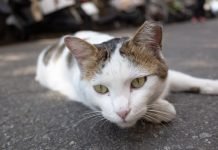