“The fire was outside of the building,” South Salt Lake Fire Chief Terry Addison said. “Recyclable materials were burning — about 50 feet by 100 feet, and very deep-seated.”

The materials were in one area of the facility at 3124 S. 900 West, and were bundled closely together. Heavy equipment was brought in to break up and separate the burning recyclables so crews could more easily extinguish the flames.

Still, it was an arduous process, and crews were still on scene hours after the 7:30 p.m. start of the fire. 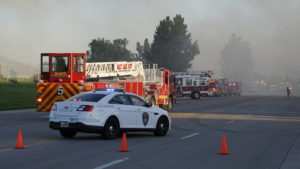 Addison said the cause of the fire has yet to be determined.