The fire is thought to have originated on the deck of the two-story structure, then spread through the back of the house and into the attic. Crews encountered heavy smoke on arrival, Love said.

He added that there is one reported injury and an individual was treated for burns, but it’s not clear at this early stage if that person was transported to an area hospital.

The fire was knocked down by 4:45 p.m. and crews then were undertaking salvage and overhaul, Love said.

Investigators are now on scene determining the cause of the fire. 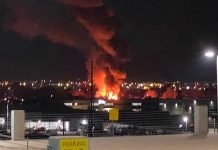