GARFIELD COUNTY, Utah, May 27, 2019 (Gephardt Daily) — Garfield County Search and Rescue assisted a party of two men and a woman who got stranded while hiking in the Capitol Reef National Park area.

A news release on Facebook from Garfield County Sheriff’s Office said dispatch was informed at about 7 p.m. Thursday of an overdue party consisting of three people, all in their early 20s.

The three were identified as Madeline Piper, Vincent Giandonato and Payton Skur, all from Colorado, the news release said.

“The family member who called into dispatch had reported that the three individuals were supposed to have started hiking on Wednesday, May 22 on the Mulie Twist Trail,” the news release said.

“Garfield County Search and Rescue along with Capitol Reef National Park Rangers began searching for the party,” the news release said. “The trailhead was checked and the search parties were unable to find the vehicle that the party was supposedly traveling in. They continued to search for the vehicle to have a starting point to try to locate the party.”

Deputies called out the Department of Public Safety helicopter to help in the search due to the extensive area to search and also weather conditions. They continued to try to locate the vehicle but were unable to find it.

“They continued to search in air and on ground all day Friday,” the news release said. “Then Saturday, one of the National Park rangers located the vehicle parked off the side of the road in a bunch of green trees on Notum Road. Due to the color of the car, which was green, and the group of green trees, the vehicle was unable to be seen from the air.”

After finding the vehicle, the search began in the Strike Valley slot canyon. The Department of Public Safety helicopter, Classic Helicopter, Garfield County Search and Rescue along with Capital Reef park rangers all searched in the slot canyon.

The party was then located in the slot canyon by the helicopters.

“After talking to the overdue party, the search teams were informed that the three individuals had been hiking in the canyon, it had rained while on their hike and they were wet, cold and exhausted,” the news release said. “The female had hypothermia and they had decided to just wait for help.”

On Saturday, May 25, Garfield County Rope Rescue Team along with Capitol Reef National Park Rope Rescue team went out to the scene and were able to rescue the three hikers and bring them out safely.

“Remember to please be safe while hiking, check the weather, keep a GPS with you, study the area you are hiking and be prepared for any weather situation,” the news release said. 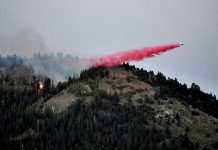 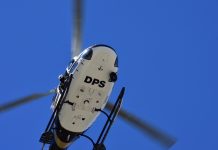