Battalion Chief Shaun Hirst told Gephardt Daily smoke and flames were visible when crews arrived at the property at 1465 W. 400 North, where a “small storage building” was burning.

“A small portion of the roof collapsed,” Hirst said, “but there were no injuries.”

The fire was called in at 6:15 p.m., and firefighters went into defensive mode in getting the blaze under control.

Crews were still on scene at 9 p.m. because the fire made its way into the roof membrane, and they had to make sure to get it completely extinguished, Hirst said.

No estimate of damages was available Saturday night. Hirst said an overheated generator may have been responsible for the fire, but the exact cause is still under investigation. 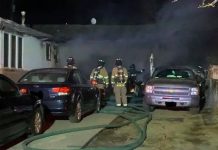