UTAH COUNTY, Utah, Sept. 7, 2019 (Gephardt Daily) — A woman in her early 40s injured her knee while hiking down Mount Timpanogos on Saturday evening, and rescue crews from multiple agencies are working to bring her down safely.

Sgt. Spencer Cannon, Utah County Sheriff’s Office public information officer, said the  woman’s injury isn’t life-threatening, but her knee is unable to bear weight, so rescue personnel have gone up and will determine the best way to bring her down from the mountain.

The woman’s predicament was reported at about 6 p.m. At 8:45 p.m., Cannon tweeted that crews had reached the injured woman and she is unable to walk out on her own.

UCSO SAR and Lone Peak Fire “will bring her out using a wheeled stokes basket. This is likely to take several more hours,” he tweeted.

Cannon said earlier that the woman was in the “rockslide area,” which is the designation for a specific area known to search and rescue teams, about a mile and a half south of the Timpooneke Trailhead. He said the rockslide itself could have occurred two years ago or 200 years ago.

Participating in the rescue are members of Utah County Sheriff’s Search and Rescue, Timpanogos Emergency Response Team, which is part of UCSO, and Lone Peak Fire. 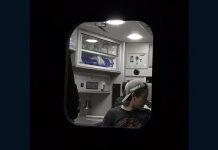 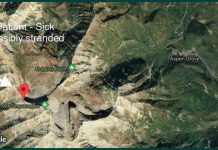 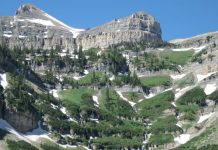