WEBER COUNTY, Utah, Oct. 19, 2021 (Gephardt Daily) — Criminal charges have been filed against a student who was “potentially planning” an attack at Weber High School.

School officials, along with district officials, have been working closely with investigators, the news release said.

“To our knowledge, the threat involved planning on the part of the student, but there was never an imminent danger to the school or other students,” the news release said.

“Fortunately, early intervention and action by law enforcement prevented any violence. According to the Weber County Attorney’s Office, criminal charges have been filed and are pending further court action.”

Due to student privacy issues and the ongoing investigation, specific details about the case and the student involved are not being released.

“The district has opened an internal investigation into the matter and will take appropriate action against the student as deemed necessary,” the news release said. “We will also continue to monitor the situation in order to ensure the safety of all of our staff and students.”

“Through the course of the investigation, evidence was found leading investigators to take the 15-year-old into custody. The sheriff’s office worked closely with the Weber School District and Pleasant View Police Department to ensure the safety of the students. Investigators worked tirelessly on this case and should be commended for their quick action and thorough investigation.

“Further investigation is taking place, but we are confident at this point that there were no other students, or suspects involved.” 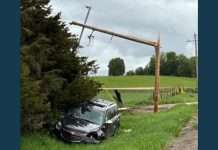