That was the last time anyone saw Bobbi Ann Campbell.

Cook, now a mom of two young kids of her own, was only 5 years old the day her mother disappeared. Cook remembers that the day started off as a normal as any other.

“It was two days after Christmas and we were living with my great-grandparents in Draper. We had just done laundry and my grandma had given my mom $20 for gas,” Cook said. “We left and went to a friend’s house where my mom dropped me off and said she would be back after she picked up her paycheck and got some groceries.”

Campbell, who was 24 at the time, never picked up that paycheck.

A missing person’s report was filed when Campbell didn’t return, but it was closed when a miscommunication occurred and the detective over the case had been told Campbell showed up for a court appearance a couple of weeks later.

“No one has ever been able to prove my mom showed up for that court date. No one. There is no paper trail, no signatures, no one remembers my mom being in court that day,” Cook said.

The next lead in the case came a year later when Cook said her grandpa got a call that the car he owned, the one Campbell had been driving the day she disappeared, was found abandoned in a no-parking zone in front of a home by the Jordan River.

“The elderly woman who lived in the house said the car had been there for quite some time, but could not remember how long,” Cook said.

All of Campbell’s belongings, her purse, makeup, Christmas presents for some friends and even the $20 given to her by her grandmother was still inside the car.

“The case pretty much went cold for a long time after that, until one day I decided to call ‘America’s Most Wanted,’ I guess around 2009,” Cook said. “They are the ones who called Salt Lake Police to ask about the case, and that was how the case started to get attention again. It never made it on the show, but it did restart interest in the case.”

About that same time, Cook’s grandparents had a plaque made and placed at Larkin Mortuaries for her to be able to go and have somewhere to memorialize her mom.

“The best case scenario of course would be to find her alive, I know it would also be hard to process, but it would definitely be the better outcome.”

Anyone with information that may pertain to the disappearance of Bobbi Ann Campbell is urged to contact the Salt Lake Police at 801-799-3000.

There is also a Missing Bobbi Ann Campbell Facebook page created to help share information about the case. 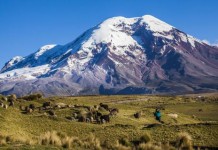 Bodies On Volcano Possibly Of French Climbers Missing 21 Years Ago